Speculating the Effects of a Historic Election

Now that elections are over, America continues to contemplate what the future holds 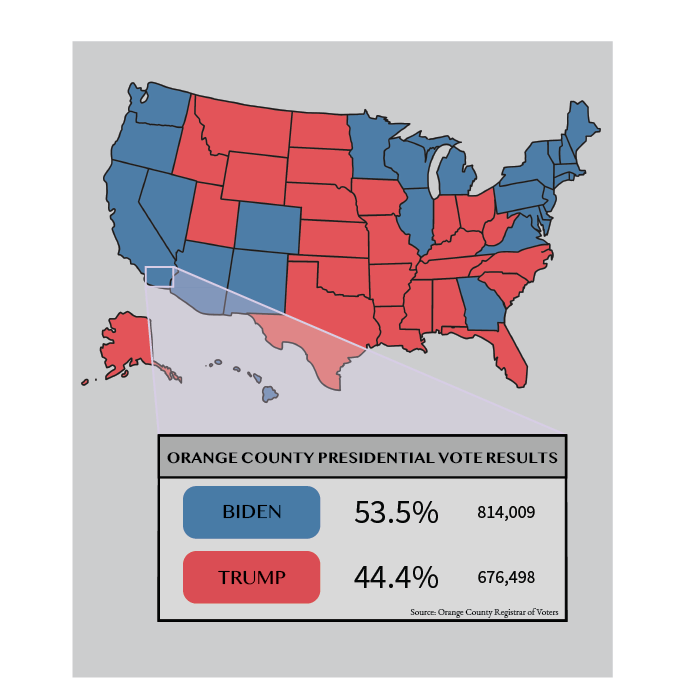 During the 2020 presidential election, Biden won in Orange County by 9.1%.

The 2020 election has been a chaotic and historic moment for the country. Many people were glued to their televisions and computers for over a week waiting for the results to come to light. Now that the election has come to an end with President-elect Joe Biden winning the electoral college by 74 votes, Americans turn to speculate on the effects of this election.

One of the most pressing concerns for all of America is COVID-19 and how the future leaders of America plan to address it.

The Biden-Harris website answers these concerns with a seven-point plan on how they will combat the virus once in office. This plan includes improving testing quality and accessibility. This would likely include producing more critical supplies of protective equipment, such as masks and face shields, providing clearer guidelines on how communities should handle the virus and planning for the vaccine. This would look a lot different than how the Trump administration has handled the virus so far.

“Trump showed that he was not equipped to handle this situation correctly, especially through his own immaturity and hypocrisy. He was obviously more interested in keeping the economy afloat than keeping people alive,” junior and Woke club president Dorrin Sepehrdoust said.

Assuming the Senate is agreeable with the Biden administration, the first order of business would likely be to undo some of the foreign affairs policies that Trump put in place. These would include re-entering the Paris Agreement, which is an agreement with the United Nations regarding climate change, and renewing membership to the World Health Organization.

“This administration will probably be more environmentally conscious by putting more regulations on business than the Trump administration. Taxes will most likely go up on the wealthier in society as well as the corporate tax,” history and government teacher Chris Lepage said.

This would be a shift that would affect many aspects of American lives on both a local and national level.

“I am not sure if there will be any ‘major’ impacts concerning this election. Hopefully, less negativity in the media and a less divided country and more focus on our commonalities,” Lepage said.

There has been a lot of antagonization from both sides of the political spectrum during these four years of Trump’s presidency. While some think the election will fix this problem, there are others who believe this election could only heighten the divide between both sides .

“There were record numbers of votes for both sides, the modern partisan vote is deeper than ever,” senior and Civil Discourse club member Steven Kam said.

Only time will tell what will happen as a result of this election and what effect it will have on the people of America. In these coming years, it will be interesting to see what changes come and how the country will progress as a whole.