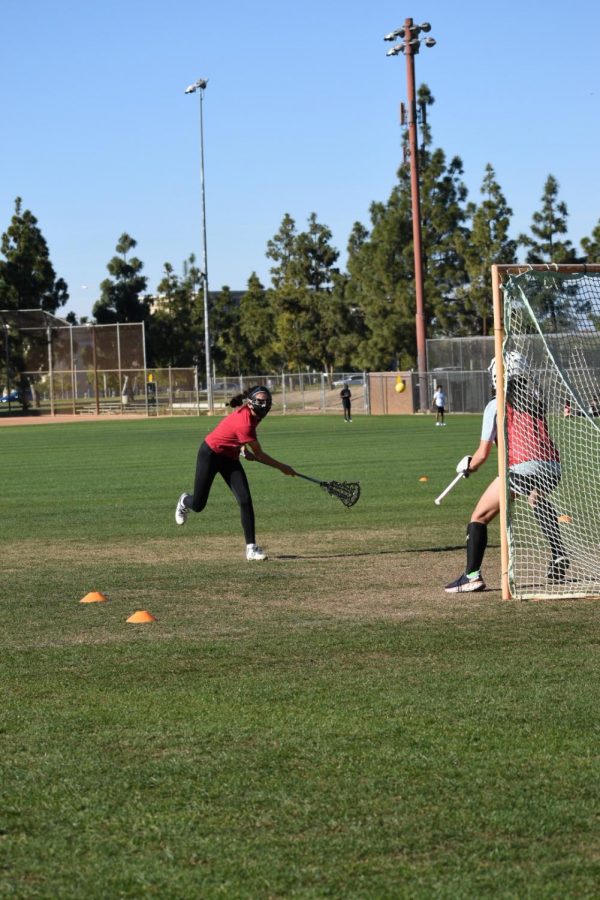 LAX preparring for their sason at Mark Daily.

On Feb. 9, 2021, CIF Southern Section (CIF-SS) released an update which reiterated that cross country, swimming and diving, golf, tennis and track and field can begin competition in the widespread tier, as well as stated that all sports are allowed to hold practices according to safety guidelines. The latest guidelines are listed on the CIF-SS website. As for Irvine Unified School District’s (IUSD) policies on sports, IUSD athletic director Mark Cunningham said that they will follow guidelines set out by the CIF and will not make decisions contrary to county or state regulations.

At Woodbridge, junior basketball player Joshua Lomboy said that boys basketball practices are held outside, everyone wears a mask the entire time, and they stick to individual skill work and conditioning. Their coach also wears a mask, gloves and a face shield.

“I know that I have to do what’s best for the safety of my family and everybody else. So I’m willing to give up [playing basketball normally] if that’s what it takes,” Lomboy said.

Girls lacrosse also experiences challenges in their practices, including wearing masks and being six feet apart the entire time, even during runs and drills. Other than the two days per week that girls lacrosse has in-person practices, the team has at-home workouts which involve strength and endurance work such as squats and push ups.

“So, lacrosse is a big communication sport and it’s hard to hear people when we have our masks on, so it’s a lot of yelling, which is not the easiest,” sophomore lacrosse player Maddie Weiss said.

Although the restrictions on many sports at school are difficult to fathom, Woodbridge athletes have been able to find the light in their difficult situations by supporting each other, deepening their connections and recognizing that they are in it together.

Weiss said that she has had the opportunity to become closer with her teammates outside of lacrosse practices as a result of not being able to see them as often this year. An important part of sports is the relationships athletes have with each other, and Woodbridge athletes have still been able to maintain them despite COVID-19.

“I am excited to be able to swim because I love swimming, especially with the people who I am friends [with]. I have a positive mindset and I am excited to have a season where I can swim,” sophomore Riley Hodges said.

Woodbridge coaches have reportedly been wonderful examples for students in how to deal with change to practice routines.

“[Our coaches] take it very seriously and I think their leadership is something we can look up to. I just want them to know that despite everything that’s happening, they’re still doing a good job,” Lomboy said.

Maintaining a positive mindset and having support for each other have been essential for Woodbridge athletes to get through the setback that is COVID-19.